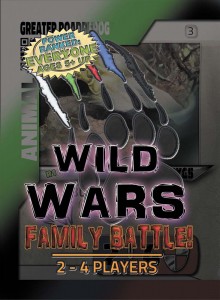 Are you a Wild Wars player that wants to help us refine the rules for our upcoming Family Battle game? 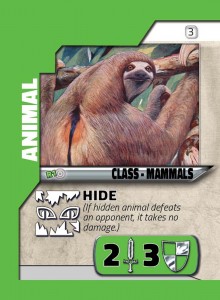 While the final game includes special animals from all five kingdoms with universal food costs and be available at Christmas, here’s how you make a basic prototype test deck:

Take any two (or more) beginner decks, remove all objects, and then combine the remaining cards into one deck at a 3:2 ratio of animals to food. (With two decks, you’ll probably end up with a 60 card deck, which is enough for two players. For every 20 additional cards at this ratio in your final deck, you can add an extra player, so 80 cards for 3 players and 100 cards for 4 players.)

Each player gets 8 cards and gameplay rules are the same as regular wild wars with the following exceptions:

1) Play all animals as though they had universal food costs.

2) Although everyone has a personal boneyard, deal the cards from a communal deck.

3) Everyone draws a card, even the first player.

4) Suck creatures aren’t in the official WW:FB game, so give suck animals “rush” for testing purposes.

5) The goal is to gain points with the first person to 10 points winning.

Points are gained as follows: